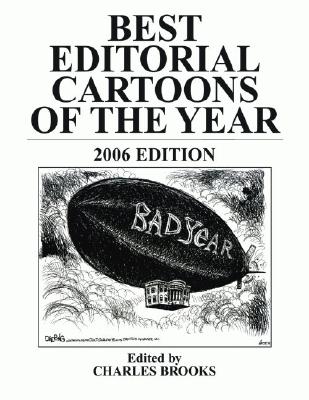 Softcover in Like New condition. Pages are clean. Binding is tight.

Londoners
displayed their famous stiff upper lips, even though ours quivered with sorrow
as terrorists bombed the tube. Americans uneasily watched as Discovery
astronauts made shuttle repairs in space. Baseball fans cheered the
breaking of the curse as the Chicago White Sox won the pennant and went on to
take the World Series; they jeered as their heroes appeared before Congress in a
performance-enhancement steroid scandal. Freedom was measured
by the color purple, as Iraq held unhampered elections. Deep Throat stepped out
of the shadows of Watergate, while water engulfed separate corners of the globe.

Provocative and controversial, this collection, edited by Charles Brooks, offers
the thirty-fourth edition of the most thought-provoking editorial cartoons of
the year. Showcasing a variety of viewpoints, the cartoonists satirize
headline-making news that defines and shapes the world. Agree or not, these
award-winning cartoons are bound to stir your own emotions and opinions, making
Best Editorial Cartoons of the Year: 2006 Edition all the
more enjoyable.
This
edition surveys the mood of the nation on the passing of a pope, a Supreme Court
chief justice, and a civil rights icon. As always, the political arena proves
fruitful, from antiwar protests to the Bush administration 1/2s high and lowlights.

Since
1972, Pelican has presented this diverse compilation of the most outstanding
editorial cartoons from publications across the country. Selected for clarity of
position as well as for exceptional execution, this collection includes the work
of Pulitzer Prize-winning artists, the year 1/2s major award-winning cartoons, and
the best work from Canadian cartoonists.

About the EDITOR
Series editor Charles Brooks is past president of the Association of American
Editorial Cartoonists and was a cartoonist for the Birmingham News for
thirty-eight years. He has received thirteen Freedom Foundation awards, a
National VFW Award, two Vigilante Patriot awards, and a Sigma Delta Chi Award
for editorial cartooning.